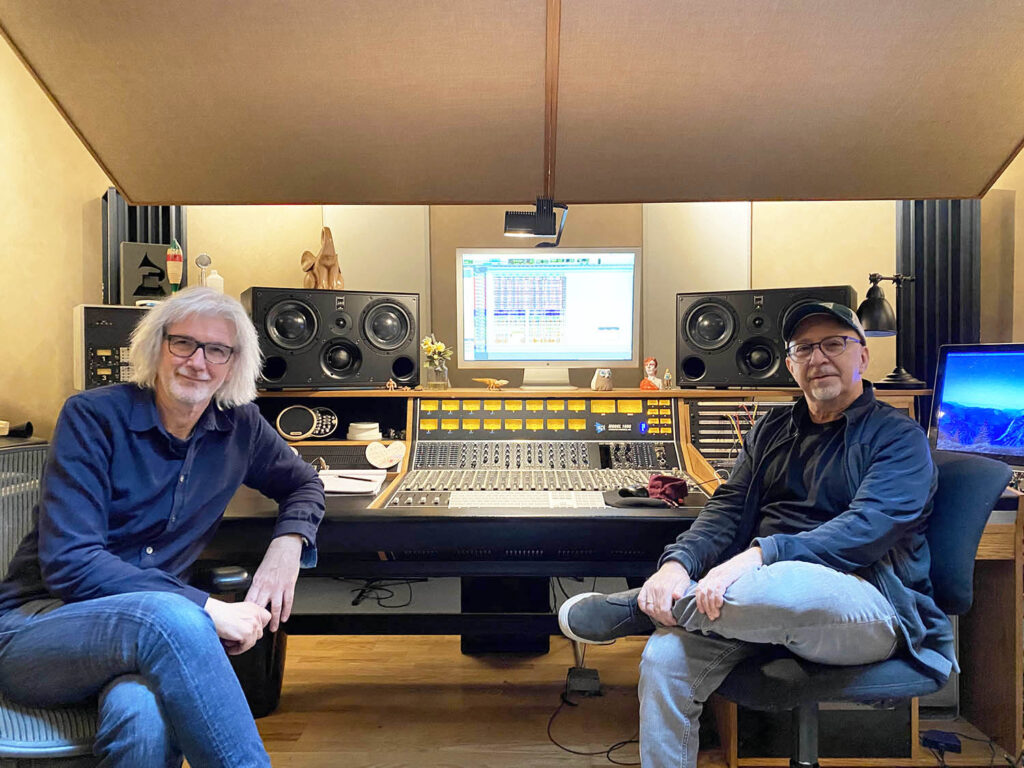 WEEHAWKEN, NEW JERSEY – MARCH 2021: Tony Shanahan and Stewart Lerman are friends and fellow music industry insiders who share Hobo Sound Studios in Weehawken, New Jersey. Shanahan has variously produced, engineered, written, and played bass with Michael Stipe, Ryan Adams, Robert Plant, Faith Hill, Aimee Mann, Natalie Merchant, and Suzanne Vega, to name a few. He has served as Patti Smith’s bass player for over two decades and co-wrote her Grammy-nominated hit 1959. He currently serves as Smith’s musical director. Lerman is a two-time Grammy Award-winning producer and engineer who has worked with Elvis Costello, Neko Case, David Byrne, Sufjan Stevens, Mumford and Sons, and Crash Test Dummies, to name a few. In addition, he has produced music for movies, such as The Royal Tenenbaums, The Aviator, School of Rock, and TV shows, such as The Marvelous Mrs. Maisel and nearly five dozen episodes of the musically-rich Boardwalk Empire. Shanahan and Lerman recently upgraded Hobo Sound’s main control room with a pair of ATC SCM45A three-way monitors.

“Years ago, I would schlep my monitors around with me to the various studios that I worked at to maintain some consistency,” Lerman said. “I first encountered ATCs at a studio called The Lair over a decade ago, and I thought they sounded so beautiful! On my subsequent trips to The Lair, I left my monitors at home. Then a few years ago, ATCs started popping up at all of the New York City studios that I frequent: Electric Lady, Brooklyn Recorders, Reservoir Studios, and Manhattan Center. They all had different ATC models: SCM25As, SCM45As, SCM50ASLs, and SCM100ASLs. They all sounded great and remarkably consistent from model to model. Soon, every room I regular worked in had ATCs, and I no longer felt compelled to bring my own monitors.” Shanahan was similarly enchanted with the sound quality and performance of the ATCs in those same studios, and so the partners decided it was time to upgrade Hobo Sound to ATC as well.

“We used to have a sub with our previous monitors, but once we put the ATC SCM45As in our control room, the sub became unnecessary,” Shanahan reported. “The 45s have plenty of low end that is punchy and defined, and they’re remarkably revealing and accurate at all listening levels. They’re clear without being overly bright, and I never get ear fatigue.” Lerman agreed: “I do so many styles of music for film, TV, and records, and I love tracking loud. That’s mainly for the musicians. I think it’s weird if their headphones are blasting in the live room and then they come back to the control room and everything is quiet. Like, what happened!? So, I try to keep tracking dates loud. But when I mix, I tend to mix quietly because I hear different details and can tell when something’s poking out. The thing about the ATCs is that they sound amazing and consistent at any volume. No pain, no bulbous low end. I really look forward to going to work!”

Like most (all!?) engineers, Shanahan and Lerman spent their early years battling the demons of translation. “So many times I’d get a mix sounding good on other monitors, and then I’d hop in my car at the end of the day, listen back, and go, ‘what the hell was I thinking!?’,” Shanahan said. “The ATCs remove any guesswork, and I’m not questioning myself anymore. It’s easy to make good choices, and I’m never surprised by what I hear on other systems. We even have a little setup in Hobo Sound with a bunch of different reference speakers, but ever since the ATCs arrived, I don’t use them. If it sounds good on the 45s, I know it sounds good, period.” Given ATC’s ubiquity in the New York City studios that they both work in and ATC’s noted consistency across models, Shanahan and Lerman have a solid basis to build successful projects from the ground up with confidence.

Shanahan is currently leveraging ATC’s honesty to assess materials for a planned remastering of all of Patti Smith’s records for a box set. “I’m going through all kinds of stuff with an ear out for the gems that fans will love to get a hold of,” he said. “A lot of it is on old tapes that don’t sound very good.” Lerman recorded Loudon Wainwright III’s new big band album, I’d Rather Lead a Band at Electric Lady on their ATC SCM50ASLs and mixed the project on Hobo Sounds ATC SCM45As. Similarly, he recorded music for Respect, a new movie about Aretha Franklin, at Reservoir Studios on their ATC SCM25As and mixed on Hobo’s 45’s. Finally, Lerman mixed all of the most recent season of The Marvelous Mrs. Maisel on Hobo’s 45s.