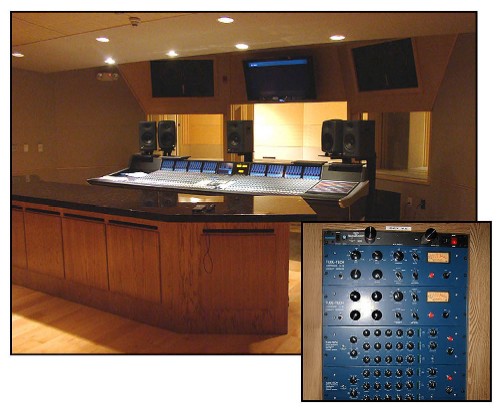 CHULA VISTA, CALIFORNIA MARCH 2009: Southwestern College, located between San Diego and the international border with Mexico, recently unveiled a brand new recording arts studio as part of its commercial music program. Costing $6.5 million, the two-building complex is one of the most technically-advanced media facilities in the nation’s community college system, and features a cross-section of high-end recording equipment in the main studio, including a pair each of TUBE-TECH’s CL 1B opto compressors and SMC 2B stereo multi-band compressors.

The facilities are designed to give students a real world education in analog and digital audio equipment, according to Arts & Communications professor James ‘Jay’ Henry, who has been a recording engineer and studio manager for 35 years, and took over the program about ten years ago. “The whole philosophy was to build a real recording studio that would actually draw professional engineers and producers to come and work on projects. Students can observe, interact and learn but, more importantly, when they go into the real world, they’re not going to be overawed by the equipment they see in a modern studio.”

Henry, who was first introduced to TUBE-TECH by Stevie Wonder while working with him on a charity record project, continues, “TUBE-TECH’s stereo multi-band compressor is my favorite box. I use those as program compressors, instead of the buss compressor on the SSL console, simply because it adds a different color. What I also really like about the TUBE-TECH is that it adds inherent warmth. We have an SSL Duality and it’s fabulous to throw that across the stereo buss. It just warms things up.”

Henry shares that he recently re-equalized and re-mastered a project for a country music client using the SMC 2B. “The client called me and said, ‘The remix is amazing. The bass is amazing!’ I said, wait a minute. You sent me a stereo mix. All I did was re-EQ and dynamically balance it. It’s multi-band compression, thanks to my analog friends there in Denmark,” he says.