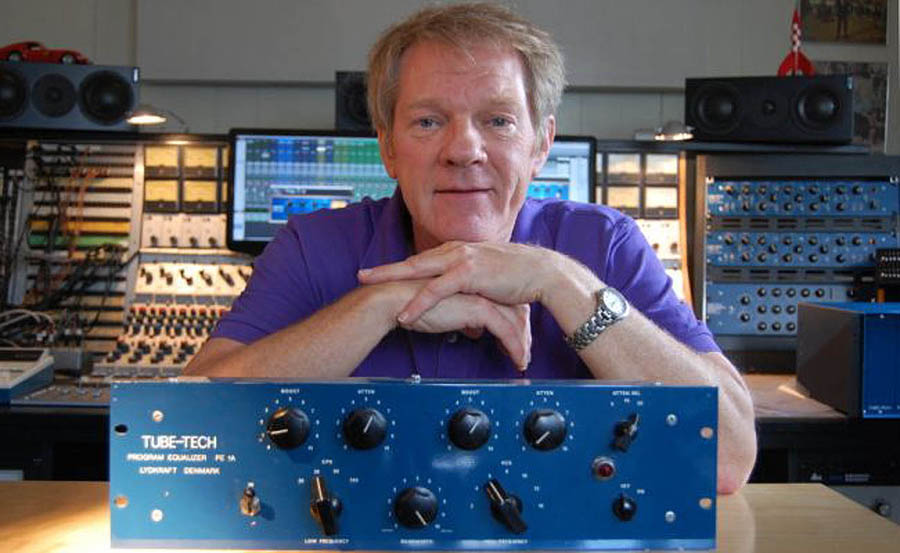 TUBE-TECH president and designer John Petersen with their very first unit – the PE 1A Program EQ.

COPENHAGEN, DENMARK – NOVEMBER 2010: For twenty-five years, engineers and producers the world over have associated the no-nonsense blue faceplate and white typeface of TUBE-TECH analog processors with the lush, dimensional sound they impart to any audio that flows through them. After 25 years in business, TUBE-TECH president John G. Petersen continues to craft their equipment with simple, elegant circuitry using only premium-grade components. From the start, Petersen designed TUBE-TECH gear using only vacuum tubes in the active signal path and only transformers on the inputs and outputs. Since the first the design of the first Program Equalizer PE 1A in 1985, over 15,000 TUBE-TECH units have shipped from the headquarters of parent company Lydkraft in Denmark. Because their lifetimes are measured in decades, almost every one of those units is still helping make the music of today sound much better than it would have otherwise.

Before TUBE-TECH became a reality, Petersen had received a degree in electrical engineering from Danish Post and Telegraph and took a job in 1972 at the Danish Broadcasting Company (DBC). In his role as maintenance engineer, he received factory training at Solid State Logic, EMT, Studer, Sony, Neumann, NTP, and Lyrec. His genius for inspecting, understanding, and repairing audio circuits paved the way for TUBE-TECH. “A friend of mine was opening MOX Studio in Copenhagen in the mid-1980s,” said Petersen. “I helped him refurbish all of the gear that was going into it, including two Pultec equalizers. I was skeptical about those boxes. They looked like they belonged in the city dump! But they tested nicely and, more importantly, they sounded amazing.”

Petersen and others could already see that the demand for Pultec units was increasing just as their supply was decreasing. A Denmark-based retailer suggested that it would buy twenty units, if Petersen could deliver a sonic replica of the Pultec EQP-1A. Instead, he built thirty, and sent a few of the remaining stock to a distributor in New York. “They liked them,” he said. “And they wanted more.” For five years, Petersen worked out of his garage during off hours, still keeping his day job at DBC. He continued production of the TUBE-TECH PE 1A, and branched out to design and build the CL 1A compressor and MP 1A mic-pre/DI. The now famous blue faceplates were a simple consideration of aesthetics. “It appeared to me that all of the other manufacturers were building equipment with black or metal faceplates,” Petersen remarked. “That seemed boring to me, so I thought: Let’s add some color! And blue is my favorite color, so there you go.”

Around 1990, Petersen shed his DBC job, hired a small team of exacting technicians, moved out of the garage, and went after the TUBE-TECH paradigm without distraction. In the two decades that followed, Petersen has continued to design modern-day classics. Today, the TUBE-TECH catalog features single-channel and dual-channel opto compressors (CL 1B and CL 2A); a Fairchild 670 homage (LCA 2B); two stereo multi-band compressors (SMC 2B and SMC 2BM); two parametric equalizers (EQ 1A and EQ 1AM); a passive midrange equalizer (ME 1B); the now-famous Pultec replica (PE 1A); a dual-channel mic-preamp and DI (MP 1A); and a twenty-input stereo summing amplifier (SSA 2B). In addition, TUBE-TECH offers two recording channel units that combine preamp, equalization, and compression (MEC 1A) or preamp and multi-channel compression (MMC 1A), as well as a new RM modular series that allow users to build custom units that compromise absolutely nothing in build or sound.

Through all of this, Petersen has never strayed from the core design principles that went into the original PE 1A. Most obviously, every piece of TUBE-TECH equipment is centered on vacuum tubes. “Simply put, tubes sound pleasant to the ear,” said Petersen. “They treat signals with respect. But perhaps more profoundly, they place serious constraints on how much circuitry you can build into a unit. With a solid-state design, an engineer is free to add circuitry with very little penalty, which can start you down the road of ‘fixing’ perceived faults in the design with even more circuitry. Unfortunately, the end result is usually something that sounds worse than if the original circuit had been improved from the start. TUBE-TECH equipment has at most six active elements, an upper limit based on considerations of space and heat. As a result, I have to design very simple circuits. There is no ‘patch’ that I can use to fix a circuit’s faults. It has to stand by itself.”

TUBE-TECH’s future looks to be as flawless as its past. Petersen has no plans to build “entry level” equipment, nor is he looking to invent some unimaginable new paradigm in analog processing. The company is so successful because it builds professional-grade equipment of unsurpassed quality and unquestionable utility, and this is exactly what it will continue to do into the future.

ABOUT TRANSAUDIO GROUP
TransAudio Group, founded by industry veteran Brad Lunde, has quickly become the premier U.S. importer/distributor and/or U.S. sales and marketing representative for high-end audio. Success hinges on TransAudio providing dealers and end users with a higher standard of product expertise and support far beyond the norm.