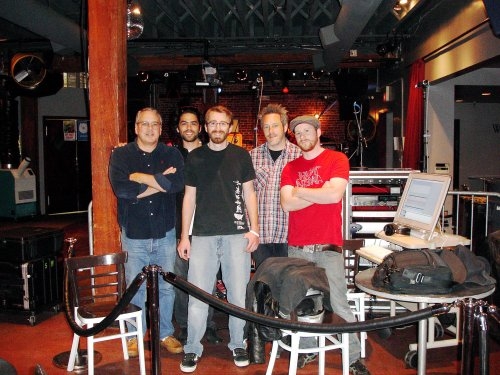 LIVERPOOL, UNITED KINGDOM – JULY 2008: With their star already at a dizzying height above the famous harbor of their hometown of Liverpool and rising ever higher, The Wombats have earned respect and well-deserved hype for their debut album and EP. Indeed, Sir Paul McCartney (um, The Beatles) holds aspirations of producing them! With their next release poised to rocket the trio to the top of the charts, it’s little wonder why Sep V, co-owner of the band’s US label, Bright Antenna Entertainment, thought it would be a good idea to capture The Wombats first show at San Francisco’s now-legendary Popscene club with fidelity worthy of a future release.

“Seeing a great show at Popscene is an awesome experience that’s a little hard to describe,” offered Sep V. “It’s what I imagine it would have felt like to be in Seattle at a Sound Garden or Nirvana show – like there’s a movement happening. The lights go down, the music kicks up, and the kids start going nuts and pogo-ing all over the place. So I felt like this would be a monumental show for The Wombats, and I wanted to capture that raw energy.”

Sep V contacted Stephen Jarvis, whose ultra high-end remote recording equipment has been making better-than-studio quality recordings throughout the Bay Area and abroad since 1987. Jarvis got his start as a studio engineer in the early 1970s and slowly grew a collection of peerless gear. He bought his first bank of George Massenburg Labs mic pres as the sun set on the 1970s and “never looked back.” His current inventory boasts 48 channels of GML 8300 pres, an equal complement of Genex converters, and a road-ready Pro Tools HD rig.

Sep V entrusted Mike Walti, chief engineer at Bright Antenna’s sister studio, FM Recorders, to execute the recording. Walti mic’d the drum kit with a Shure SM 91 and an Audix D6 on bass, two 57s on snare, Sennheiser e 604s on toms, and AKG C 451s for hi-hats and overheads. The band’s deliberately dirty collection of old Fender amps received Blue Ball mics, as did the bass cabinet. Walti used a Shure Beta 56A on one keyboard amp and DI’d the other two. Finally, the three musicians sang into Shure 58A, 57A, and 56A mics, with the first number of the night sung a cappella into lead singer Matthew Murphy’s 58.

All of the mic signals passed through Jarvis’ GML 8300 pres before hitting the Genex converters and the Pro Tools rig. “The GML pres have the fastest transient response of any pre I know of,” remarked Jarvis. “They convey clarity, punch, and fullness with musicality. I also love them for remotes because the gain is set in 5dB steps. So you don’t over-think it. You set your levels and forget about it. Let your brain worry about issues that are, in reality, of greater consequence than a few dBs here or there!” In all the decades that Jarvis has had dozens of GML mic pres on hand, he has never once had one fail.

“The recording went down so easily – almost too easily,” said Walti. “I was especially impressed by those things that normally sound harsh in Pro Tools, like overheads. They were smooth and pleasant. The kick was nice and fat, and the vocals have the sort of clarity and presence that will sit nicely in just about any mix.”

Although Sep V was deliberately vague about the future release of the recording, he wasn’t vague about his pleasure with the way it turned out. “For reasons that I haven’t figured out,” he says, “the industry seems to have moved away from high fidelity. I guess they suppose there’s some kind of trade-off between worrying too much about the technical side of things and letting the music happen authentically. But I don’t think that’s right. I think that for the music to be portrayed correctly – especially of a band as obviously talented as The Wombats – you have to capture the reality of what they’re doing. That’s what I love about the GML pres and Jarvis’ rig: you come away with a recording that you can take to the bank.”