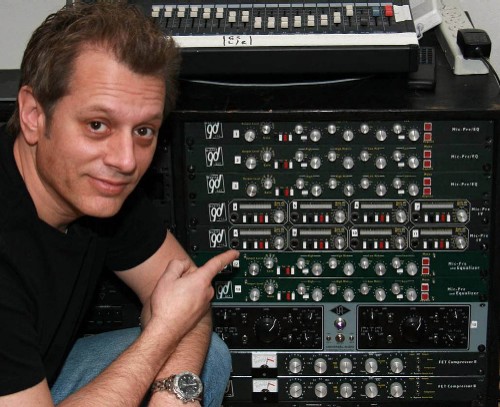 Jazz-fusion drummer/composer/producer Dave Weckl equipped his L.A. studio with thirteen channels of Daking mic preamps and a pair of compressors, and find them perfect for “tracks by mail” for artists worldwide.

LAS VEGAS, NEVADA – MARCH 2009: Geoffrey Daking started his career as the drummer with seminal ’60s psychedelic rock band the Blues Magoos before going on to design and manufacture some of the industry’s most respected music recording equipment. Inspired by Daking’s pedigree and the quality of his audio products, today’s top drummers are integrating Geoffrey Daking & Co. microphone preamps, equalizers and compressors into their recording setups, including, most recently, Dave Weckl, as well as manufacturer Drum Workshop and Billy Ward.

Jazz-fusion drummer Weckl equipped his Los Angeles studio with thirteen channels of Daking mic preamps and a pair of compressors. “I have five Mic Pre/EQs, for kick, two snares and overheads, and two Mic Pre IVs for toms, room and anything else I record. I also have two of his FET Compressor IIs,” reports Weckl, who, in addition to leading a band and maintaining a busy schedule as a sideman, also offers a “tracks by mail” service for artists worldwide. “Being that I will generally not mix the song, I want to insure that the client gets ‘my’ sound right out of the box. The Daking gear allows that to happen, allowing me to tailor the EQ and compression going in to the files. This way, all they pretty much have to do is put up the faders and the sound is there for a great starting drum sound.”

Founder Don Lombardi, who originally started Drum Workshop as a teaching institute, has now established Drum Channel, a video-based web destination for the drumming community. Drum Channel films instructional videos, master classes, interviews and concerts featuring a who’s who of top drummers at its HD video studio in Oxnard, California. At the sound stage, says Scott Donnell, director of marketing for Drum Workshop, Inc., “We have eight channels of Daking Mic Pre IVs. We also have two of the FET Compressor IIs. We use those on stereo overheads a lot of the time.”

The Digidesign Pro Tools-equipped facility includes a variety of analog signal processing equipment, continues Donnell. “In today’s recording world,” he adds, “everybody is trying to warm the digital signals up. Since we’re using a control surface we’re not getting any tone out of a mixing console. So having the Daking stuff here is saving our butts!”

As it turns out, Billy Ward, who has been using the equipment since the early 1990s, is responsible for originally turning both Weckl and Drum Workshop onto Daking. “Not only them, but also Bruce Gaitsch, Richard Marx, Jack Petruzzelli, and a whole lot of people,” laughs Ward, an avid educator, as well as a busy session drummer and leader of the Billy Ward Trio. “My studio started with four Daking mic pres and four mics, to record drums for composers and records and to keep me from traveling.” Now, in addition to also owning the first eight-channel mixer that Daking manufactured, he says, “I have eight channels of his mic pres and five limiters. I love Geoff’s stuff.”

According to Ward, Daking equipment makes it easy to get a great drum sound: “The Dakings have a fidelity and they move everything forward,” he says. “A lot of people love them for vocals because they move the vocals so forward in the mix, and it’s so shimmery and pretty. You might think another mic pre sounds better, but if you’re making a record, you can have 32 channels of his pres and it sounds like a great record, as opposed to some other products where, if you stacked them up, it would be kind of sloppy.”

“Plus,” he continues, “his limiters are really amazing, too. In a way they may be the best things he makes. They’re so invisible, and yet you can get abusive in a musical way with them. It’s really good stuff.”

Weckl is also an avid fan of the equipment. “I love the depth, punch and true clarity of sound they capture on my own drums,” he says “and love the feel and quality of the knobs, and how solid all the units feel. I was also impressed with the spec sheet, reading about all the components used. This is serious gear!”

But inexperienced engineers should not be put off by Daking equipment’s high-end reputation. Ward points out, “The fact is, his EQs, for instance, are very forgiving for inexperienced ears. With all of his stuff you can be quite clumsy and still send something out to your client that sounds like a record.”

Donnell at Drum Workshop concurs, noting also that it’s possible to obtain great sounds quickly using Daking equipment. “There are some pretty nifty settings,” he adds, “those Fairchild presets on the FET Compressor, for instance. We’re not cutting high-budget records and getting sounds on drums for two days, so having that user-friendly interface and being able to get sounds really quickly with the Daking stuff has been a huge help.”

It can’t hurt that dedicated drummers recognize a kindred spirit in Geoffrey Daking. “I love it when I find a person who puts as much heart and soul in their work as I do,” says Weckl. “Geoff is one of those people, producing really serious, great sounding gear. Besides my clients being very happy with the sound of my drums for the projects I record for them, I have turned on as many engineers and musicians as I can to the Daking gear, and know for a fact I’ve helped to sell more than a few units. I’m very happy I found him!”