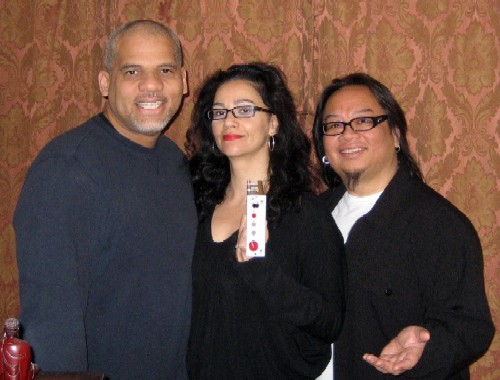 LOS ANGELES — Having performed on recordings and/or tours for Elton John, Mick Jagger, Celine Dion, Tom Petty, Johnny Cash, Ricky Martin, Tina Turner, Bonnie Raitt and many, many others, it’s almost conceivable to think that the list of top artists that first-call session drummer Curt Bisquera hasn’t worked with is shorter that the one he has. So, needless to say, it came as quite a compliment to A-Designs Audio when he recently chose to improve his kit’s sound in the studio with the addition two P-1 preamplifier modules and two new BAC-500 compressors (from sibling company Pete’s Place Audio), all housed in a pair of 500HR power racks.

“Kirkee B.”, as he’s sometimes known, is now regularly using half of his 500 Series modules to preamplify and compress an Audio-Technica PRO37 room mic that ultimately feeds into a Pro Tools system at his own Black Couch Studios in Westlake Village. “Going from the PRO37 to the P-1 to the BAC-500 and direct to Pro Tools is a super-clean signal path for super-deliciousness,” he says. “A lot of mix engineers like to have a compressed channel of the drums that they can sneak into the mix to give it a fuller, fatter live sound, and the combination of the P-1 and BAC-500 is really incredible for that. That pairing is a classic – like Lennon and McCartney, or Lewis and Martin – they’re just perfect together.”

Bisquera had initially been exposed to A-Designs through Tony Shepperd, an engineer/producer friend who had recorded his own band, the Bisquera Brothers, several years ago. “Tony introduced me to the Pacifica, which really turned me on,” he says. “Seeing that the P-1 basically put the Pacifica’s mojo into a 500 Series format, I knew that’s what I wanted to use as my mic pre.

“When I spoke with Peter Montessi at A-Designs about purchasing a P-1, I mentioned that I was also in the market for a compressor. He suggested that I try out the new Brad Avenson-designed BAC-500 from Pete’s Place and tell him what I thought of it. So I took one with me, set it up with the P-1 back at my place and was floored. It surpassed every other compressor I had tried out, and I thought ‘okay, that’s it, I’m done. If I have a P-1 and a BAC-500, I’m good to go.'”

Although Bisquera had initially purchased only a single P-1, BAC-500 and 500HR, he was so impressed with the results that he immediately added a second set in order to use the equipment for drum overheads, keyboards and other stereo applications.

“I’ve been finding myself using these modules for much more than just drums,” he adds. “I used them on a guitar track the other day and it was just screamin’. The pair is awesome on vocals, too. My wife, Daniela, is a professional jazz vocalist and she sounds phenomenal though the combination. Also, Art Kimbro, a dear friend of mine, came in recently to do some voiceover work and he was amazed how good they made him sound. I’d be really surprised if he doesn’t buy a set for himself.”

Aside from the sonics, another thing that Bisquera appreciates about the 500 Series gear is its portability. “I’m using this stuff all the time in my own studio, but what’s great about the 500HR is that I can very easily pop it out of my rack and bring it with me to sessions in other studios. For example, I just went up to Dave Way’s place, The Pass, the other day and took my modules with me, which was awesome. After all, these things are a part of ‘my sound’ now.”