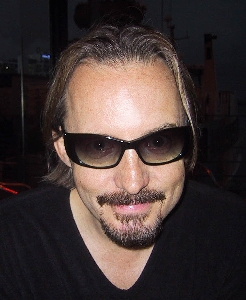 LAS VEGAS, NEVADA – FEBRUARY 2010: Few contemporary musical minds can claim credit for having helped craft as many ground-breaking works as can the mind of Butch Vig. As producer, he is responsible for both Nirvana’s Nevermind, which become one of the greatest rock albums of all time, and Smashing Pumpkins’ Siamese Dream, which helped defined the sound of the 1990s. Those two accomplishments are epic enough that no one would have faulted him for proudly resting on his laurels. But instead of resting, Vig helped propel his band Garbage to sales of over fourteen million albums from behind the drum kit, a career change that underscores the native Wisconsinite’s genuine love for making music. Since Garbage’s hiatus, Vig has gone on to produce albums for Jimmy Eat World, The Subways, and Green Day, with Green Day’s 21st Century Breakdown earning a Grammy for “Best Rock Album.” He recently worked with Against Me! and Garbage vocalist Shirley Manson, using a newly-acquired Bock 507 large, elliptical capsule microphone to record stunning vocals, as well as perfectly-balanced electric & acoustic guitars and punchy drum kits.

“I’m spoiled,” laughed Vig. “I have a vintage ELAM 250 and my engineer, Billy Bush, has a Brauner VM1 Klaus Heyne Edition. Both of those mics are absolutely amazing on vocals. I was looking for something equally amazing, but different, and I knew David Bock had a reputation for building sweet sounding mics.” At that time, Vig was beginning work with Against Me! for their April 2010 release White Crosses.

Vig used the Bock 507, which employs a patent-pending elliptical capsule to mitigate mechanical resonances, on Against Me! lead singer Tom Gabel, together with a Chandler LTD-1 preamp and a Summit LTA-100A compressor. “Gabel is tremendously dynamic,” said Vig. “The Bock 507 captured his performance with a transparency that made me feel like I was still standing in the room with him. It has a lush bottom and nice definition on top.” Many of the acoustic & electric guitar and drum room sounds on White Crosses were also recorded with the Bock 507.

Since Vig and Shirley Manson are both recent transplants to Los Angeles, they’ve been working on new songs for a possible future Garbage release. “Although Shirley’s vocal range and style is completely different from Tom’s, the Bock 507 does a wonderful job with her as well,” said Vig. “It really captures her persona. I can hear all of the breathiness in her voice. I’ve found that I really like mics that work well with vocalists singing in a high register or a low register, or whether they’re singing softly or loudly. The 507 is that kind of mic.”

Of course, no one but the producer and engineer listens to raw tracks; the mix is what matters. Here, Vig claims the Bock 507 excels. Whenever Gabel or Manson really leaned into the mic, its “sweet tube saturation,” in Vig’s words, kicked in. That, combined with the overall honesty of capturing the performance, led to a vocal track that sat happily in the mix with very little need to ride the virtual faders or add any EQ.

“The Bock 507 easily rivals the ELAM and Brauner,” concluded Vig. “Of course, you choose a mic to create a certain vibe within the larger context of a recording, and the ELAM and Brauner are certainly going to remain on the front line. But the Bock has given me another option for a go-to vocal mic. David Bock has made an incredible sounding microphone. The only question now is… should I buy a second one? It did so well on individual instruments that I’d love to hear a piano with a pair of 507s… or a stereo pair for room mics on drums. That would be amazing!”