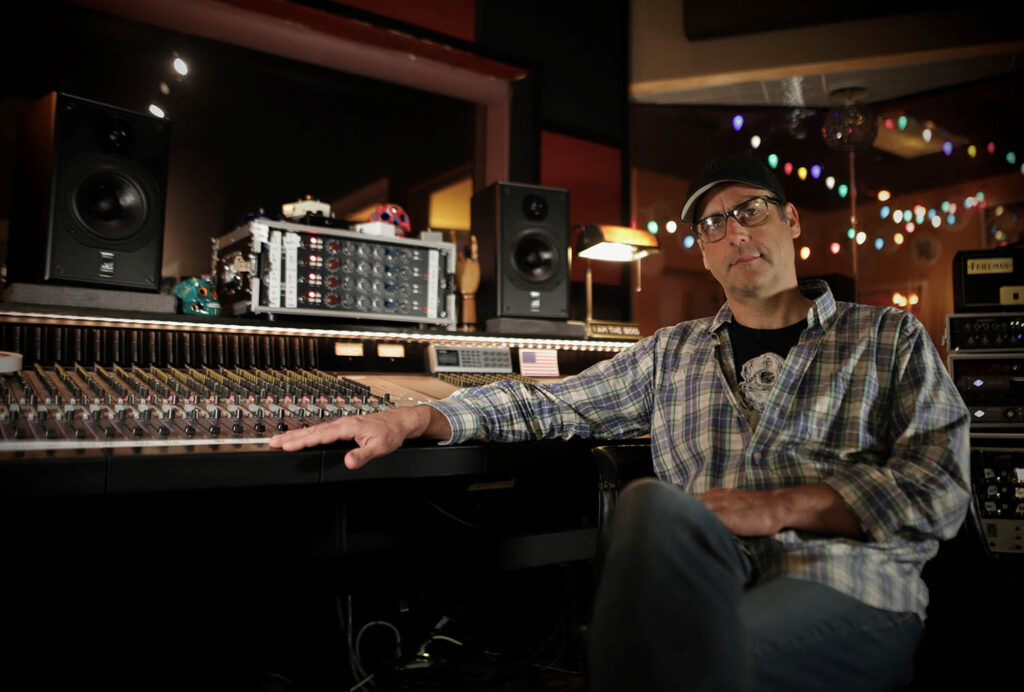 DECATUR, ALABAMA – JUNE 2021: Now celebrating twenty years of inspired music, Clearwave Recording Studio is the Northern Alabama home base of veteran producer and audio engineer Jeremy Stephens. Its idyllic setting and purpose-built live room make full-band recordings easy and enjoyable. Great sight lines, earthy acoustics, killer gear, and a vibe a mile deep bring the very best out of the established and up-and-coming musicians who Stephens works with. Past and current clients include Alabama Shakes, Jason Isbell, Lamont Landers, Heartland, and Drop Diver, among countless others. Like most engineers, Stephens has wrestled with the demons of translation for a long time and now considers a monitor’s ability to translate, by far, its most important aspect, beyond even its fundamental sound quality! After decades of exploring, Stephens has happily arrived at ATC loudspeakers because everything he does on them translates beautifully – and because they sound as inspiring as everything else that Clearwave Recording Studio has going on!

Stephens started his career as a musician (“if you can call a bass player a musician,” he joked) and quickly caught the recording bug. He spent his early years cultivating studio chops and the more artful skill of working effectively with musicians to bring out their best work. That hard work paid off with an assistant engineering gig with legendary Southern Rock producer Johnny Sandlin (The Allman Brothers Band, Widespread Panic, Capricorn Records). “I started working with Johnny when I was twenty years old,” Stephens said. “At first, my job entailed keeping up with the tape, labeling the console, occasionally doing a rough mix, that kind of thing. But I worked with Johnny for twenty-three years, up until his death in 2017. In that time, I transitioned to become his engineer, which let him focus on production. Really, everything I know, I learned from Johnny.”

Stephens opened Clearwave Recording Studio in 2001 predicated on the idea that to get a great recording, you must make the musicians happy. “In my experience as a musician, an engineer, and a producer, most musicians are happiest when they’re comfortable and when they’re playing together,” he said. “Then they’re able to play off of each other. My goal is to provide the setting that allows them to create something magical.”

Stephens has had that fundamental aspect of the process correct for decades, but in the familiar struggle to produce mixes that reliably translate, he has scored a more recent victory. For a long time, Stephens bounced around between monitors, consistently gravitating toward another name-brand monitor. “On forums, people always talk about how different monitors ‘sound,’ but I learned not to care about what they sound like,” he said. “What matters is how well they translate. I remember my first experience listening to a mix I did on the radio. I was so excited! I was waiting for it in my car, but when it came on, it sounded terrible! So disappointing! I kept going back to that monitor because I learned through trial and error how to work them, but as everybody knows, they don’t sound very inspiring.” For a long time, Stephens thought he just had to live with it.

That changed when Stephens started hearing the buzz about ATC monitors. “I heard they sound great and translate well, and I took the plunge,” he said. Because he already had a beloved 90s-era Crown audiophile reference amplifier and a relatively small control room, Stephens opted for the passive ATC SCM12 Pro monitors, the smallest boxes in the ATC monitoring lineup. “Of course, the ATCs sounded fantastic out of the box, but I tried to ignore that,” he said, having been burned too many times by “great sounding” monitors that didn’t actually do their job. “I initially listened to work I had already completed. Some things popped out immediately – the kinds of things I could have fixed had I known about them! The sound stage was huge, and it was easy to discern what was working and what wasn’t working with the panning.”

But the real test came in the months afterward. Stephens enjoyed recording and mixing on the ATC SCM12 Pros, and he was pleased to discover that his work translated beautifully to everything – ear buds, computer speakers, car systems, home stereos, PA – you name it. Thus, after decades in the industry, Stephens could finally enjoy the sound of his work and DO his work successfully without compromise. Shortly thereafter, the pandemic hit and slowed the work down dramatically. “But business is picking back up,” he said. “We’re tracking Drop Diver and The Band Esther right now, with more dates on the calendar. It’s been a rough year, but things are coming back!”