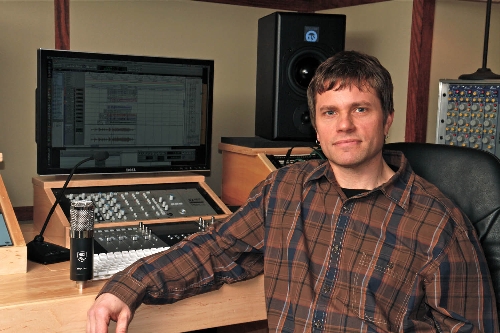 CHICAGO, ILLINOIS – MAY 2010: For some twenty years, composer, musician, and sound engineer Brando Triantafillou has been writing, performing, and recording music for advertisements, film, and rising stars in the music industry. His clients include Verizon, Adidas, Nike, McDonalds, Sony, and the U.S. Army, among many, many others. Triantafillou’s production company and well-appointed project studio in Chicago both fall under the oddly delicious name of Soundcake, where two recent additions have found a comfortable home. A new BOCK 195 large-diaphragm FET microphone jumped to the front line amid an enviable collection of other A-list condensers, and a new pair of ATC SCM20SL passive near-field monitors are revealing Triantafillou’s recordings and mixes with “brutal honesty,” leading to finished projects that translate anywhere and everywhere. The SCM20SL represents ATC’s first passive product and features the same speaker hardware and crossover as the active SCM20ASL, but at half the price.

Soundcake is set up to accommodate and amplify Triantafillou’s inspiration. A percussionist by training, Triantafillou is now also accomplished on the keyboard, bass, and guitar, in addition to possessing a voice of which many self-avowed singers would be jealous. Depending on the project, he may perform all the necessary parts himself or he may bring in a band so that he can focus on production and engineering. Instead of setting up instruments and mics as he needs them and then striking them when he’s done, Triantafillou goes with a slightly more expensive but vastly more expeditious, “leave everything up” practice. He runs a Pro Tools HD3 rig with SSL X-Rack analog summing and compression and a Euphonix mix controller. Outboard racks are awash in mic pres, EQs, and dynamics processors that would be in the top twenty hit list of any engineer. “I get a very professional sound out of a very small footprint,” said Triantafillou. “And the setup is perfect for the way I work.”

He continued, “I was looking for a new mic that would serve well in front of the kick drum, on upright bass, and on vocals. I was pretty sure the classic FET sound was what I was after. I read up on David Bock, and it seemed that he is respected for what he’s doing. I spoke with Richard Bowman at Transaudio Group, BOCK AUDIO’s U.S. distributor, who has proven himself to be a remarkably unbiased source of advice in the past. He recommended the BOCK 195 and I bought it, sound unheard.”

Triantafillou tried it out on his own voice first. “Just with the ‘flat’ settings, it sounded fantastic,” he remarked. “It was “forward” sounding, and the top end was perfectly smooth; not at all edgy. The bottom end reminded me of a thick ‘German’ sound. Overall, it was very commanding,” He was similarly impressed with the mic in front of the kick drum. He never intended to use the BOCK 195 on drum overheads, but like most engineers, Triantafillou is a curious tinkerer. “I have so many mics, large diaphragm and small, that ‘belong’ on drum overheads, but the 195 blew them all away. It’s so balanced – it reminded me of using a high-end tube. I could hear, not only a balanced and pleasing mix of cymbals but also, a nice mix of the other drums.” His next move is to get a second BOCK 195 for stereo overheads.

Triantafillou has thought quite a lot about monitors over his multi-decadal career. Until the purchase of the ATC SCM20SLs, he had never been satisfied with two-way monitors. “The mid-range was always an issue,” he said. “I found that I could never get it to translate because I wasn’t getting a good picture of it in the first place. Because I do a lot of mixes that involve music and spoken word, the mid-range is critical.” He had previous favorable experiences with ATC monitors, which are famous for their “brutally honest” depiction of what’s happening in the mid-range. When he began researching his next purchase, he was happy to learn that ATC was making a passive near-field that was both affordable and heir to ATC’s laboriously truthful designs.

He purchased a pair of ATC SCM20SLs and connected them to his hi-fi Adcom amp, which provides the minimum recommended 200 Watts per channel. “I don’t even turn my NS-10s on anymore,” he laughed. “The SCM20SLs give me a very clear picture of what’s going on, and even with a 6.5-inch woofer, I have plenty of accurate bass. In fact, I used to use a lot of high-pass filters to clean up, what I perceived as, a muddy bottom end. With the SCM20SLs, I don’t have to do that nearly as much, because I can accurately balance what’s happening from the lo-mid range on down. It’s no longer a blurry no-man’s land of frequencies.”