PLUS, A LARGER VERSION OF THE ATCS HERALD THE RECORDING’S SHOWCASE EVENT

Jimmy Jam & Terry Lewis have had an unprecedented career as producers, with five Grammy Awards, over 100 Platinum certifications, and 16 Billboard Hot 100 Number Ones. They’ve worked with legendary artists including Elton John, Lionel Richie, and Patti LaBelle, composed music for TBS and TNT networks’ NBA basketball broadcasts, as well as the theme to the opening ceremonies of the 1996 Summer Olympic Games. The duo has been inducted into the Songwriters Hall of Fame, received an NAACP Image Award, a star on the Hollywood Walk of Fame and were recently nominated for a Primetime Emmy Award in “Outstanding Music Direction.”

“We’ve been wanting to release our own album for a long time,” Jam said. “It goes all the way back to 1985. We played one of the tracks for our album for Janet Jackson while we were working with her on Control and she asked, ‘who’s that for?’. We said, ‘you if you want it’ and Janet said, ‘oh I want it!’ That song evolved into “What Have You Done For Me Lately.” which basically launched her recording career – and pretty much ended ours… as artists! Over the years, we kept attempting to restart our album, but whenever we finished a song slated for the project with one of the artists, they always said, ‘oh no, I gotta keep that song for myself.’ “The only reason we finally have an album now is because we finally got selfish and started keeping songs for ourselves!”

Jam & Lewis, Vol. 1 is a collection of entirely new songs written by the duo and recorded with the help of their many industry friends. Jam noted, “You can look at our track record of the people we’ve connected with over the years. There are people we’ve connected with not just musically, but also on a personal level. People like Mariah Carey, Babyface, Usher, Boyz II Men, Mary J Blige… those are the kind of people involved in Vol. 1.” The songs on Vol. 1 were recorded with their collaborators at numerous different studios in both analog and digital across many years, which made the process of mixing them all into a cohesive whole more difficult.

“We’re always looking for a good mix with lots of detail that adds up to an effective whole,” Jam said. “The ATCs are great for that; they’re very true. They sound warm and pleasant and are easy to work on, but they aren’t hyped. They won’t make a bad mix sound good, so they make us work! But once we have things sounding good on the ATCs, we can be confident that they will translate everywhere else – from other surround sound systems, to cars, to computer speakers, to ear buds.” 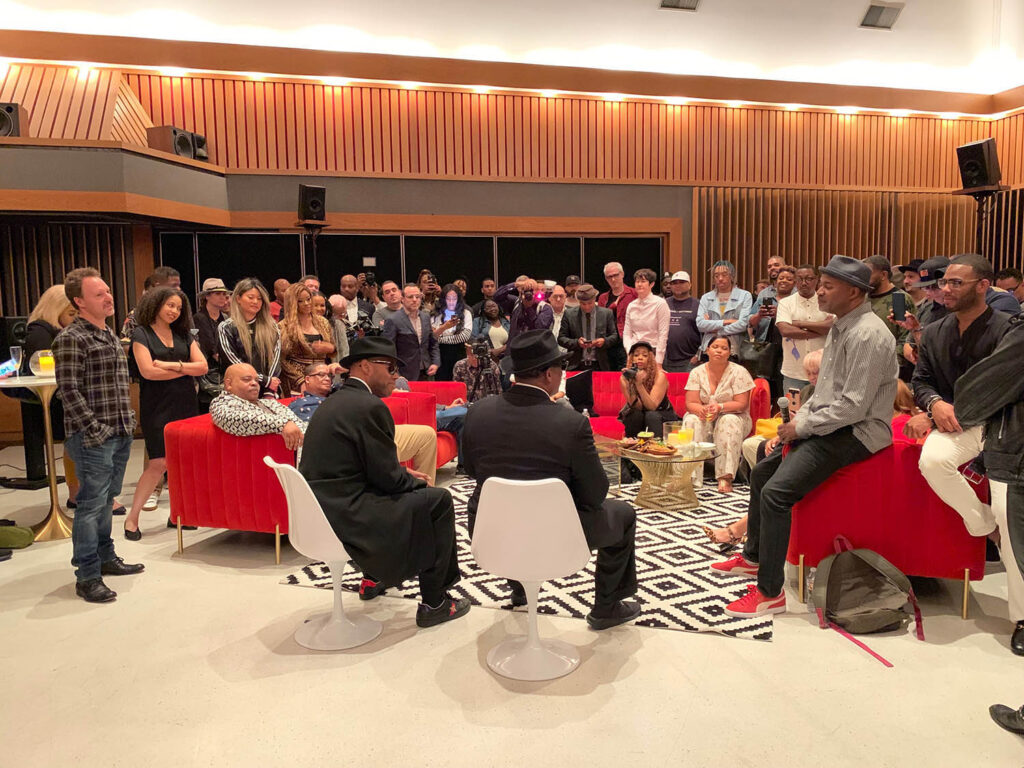 Understandably, anticipation for Jam & Lewis, Vol. 1 was at a fever pitch, so the duo arranged for a sneak preview showcase listening event to reveal their work to their industry friends and colleagues. The historic event took place at the legendary Capitol Studios in Los Angeles. They took over the massive live room in Studio A, and TransAudio Group, who were instrumental in outfitting Flyte Tyme with our ATC monitors, worked out the logistics to get an even bigger ATC system in place – enough to wash over the two-hundred-plus people who were invited to the event. The showcase ATC system consisted of ATC SCM50ASL Pro monitors for left/right, ATC SCM45A monitors for center/sides/rears, and ATC SCM12 Pro monitors for overheads. “The customer service with ATC and TransAudio Group was magnificent,” Lewis said. “They went out of their way to get us what we needed as quickly as we needed it.”

“The event was great,” Jam said. “We set up couches and carpets and arranged the monitors to create a nice, big, sweet spot. People settled in and then stayed put while we played a lot of tracks in progress off the album. I think the experience was doubly cool because they were hearing music they had never heard before, but they were also hearing it in a way they had never heard before!”